Recognizing young women in the Miami-Dade community for their superior community service involvement and academic achievements. 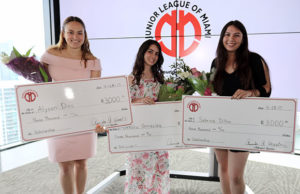 The Junior League of Miami Scholarship – In Honor of Kathryn Menke Miller
Formerly the Kathryn Menke Miller Community Service Award & Scholarship, the scholarship was established in 1985 and is given in memory of one of our members, Kathryn Menke Miller. Kathryn was the “epitome of a hardworking, caring and loving volunteer.” Her greatest accomplishments were assisting our community’s children and her dedication to our public education system. This scholarship is presented annually to a total of two female high school seniors in the Miami-Dade County Public School System.
The Junior League of Miami Scholarship – Funded by The Uppaluri Family Foundation
This scholarship was established in 2015. Mr. and Mrs. Uppaluri came to the United States individually to further their education. Because of the education they received and their hard work, they were able to succeed in their respective careers and are now in a position to give back to the community that has given them so much. Mr. and Mrs. Uppaluri strongly believe that the opportunity to get a higher education is a privilege and want to give this opportunity to hard working students in the Miami-Dade Public School System. The Uppaluri Family Foundation will provide funds for one Junior League of Miami Scholarship annually, with a possibility to receive further funding for three consecutive years upon reapplication. The funds will be provided in the following manner:

In order to be considered for one of the three scholarships awarded by the Junior League of Miami, a two-part process needs to be followed:

Each CAP advisor should select ONE (1) graduating female senior from each Miami-Dade public high school that meets the criteria stated below:

By continuing to use the site, you agree to the use of cookies. more information